Why you should choose Angular for your next project?

Google developed Angular back in 2009 to help with web development. It is one of the most popular JavaScript frameworks and aims to greatly simplify and open up front-end programming. It is an open-source front-end framework that is used to build dynamic, modern online applications. It uses the TypeScript programming language, which is based on JavaScript, to get rid of unnecessary code and guarantee lighter and faster products. 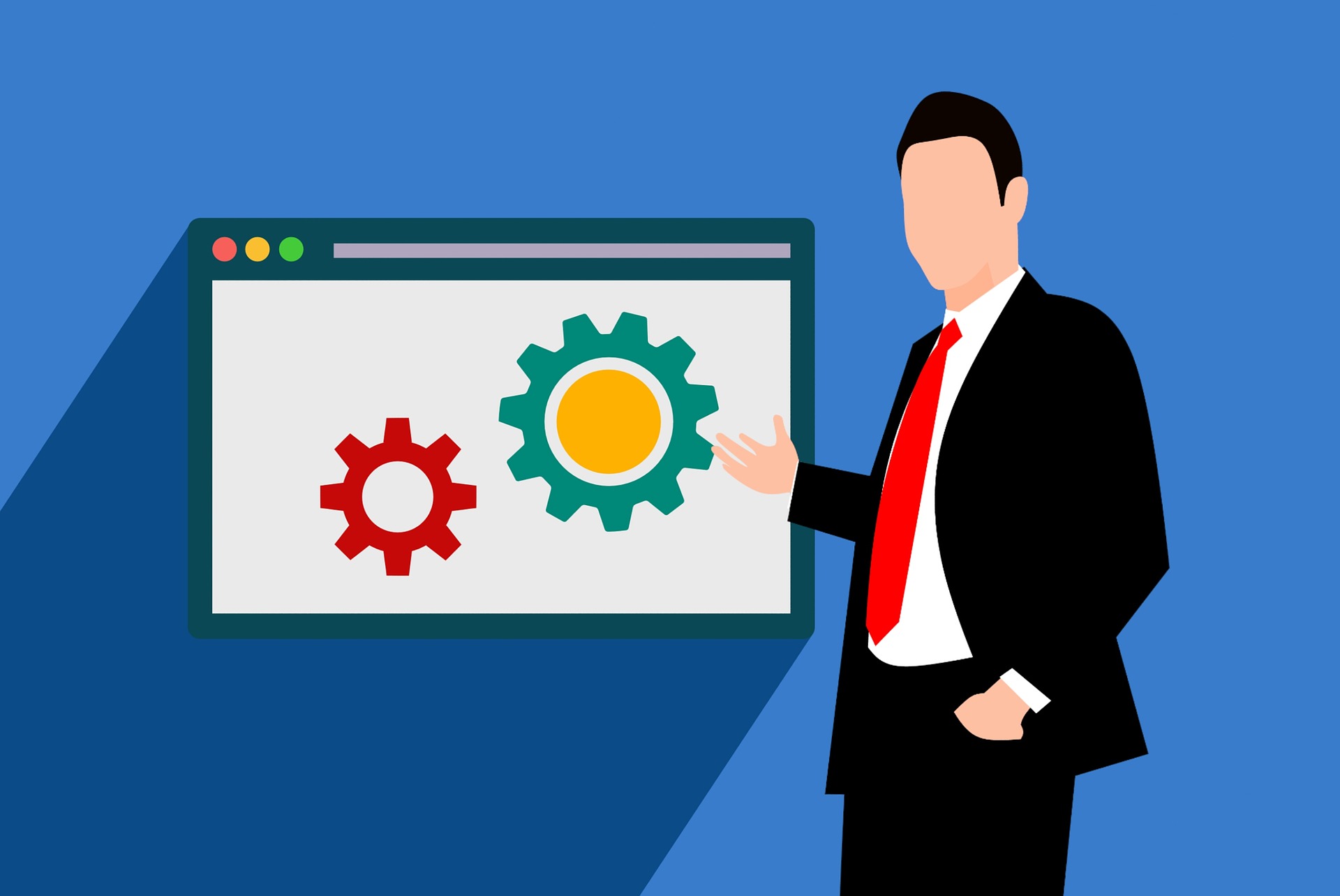 An Angular application's architecture is based on a few key ideas. The fundamental building blocks of the Angular framework are NgModule-organized Angular components. An Angular application is defined by a set of NgModules, which group related code into functional groups. A root module, which facilitates bootstrapping, is always present in an application, and there are often many more feature modules as well.

Single-page client apps using the Angular platform and framework may be made using HTML and TypeScript. As a set of TypeScript libraries that you load into your apps, it implements both required and optional features.

The image below explains why angular is so popular among developers: 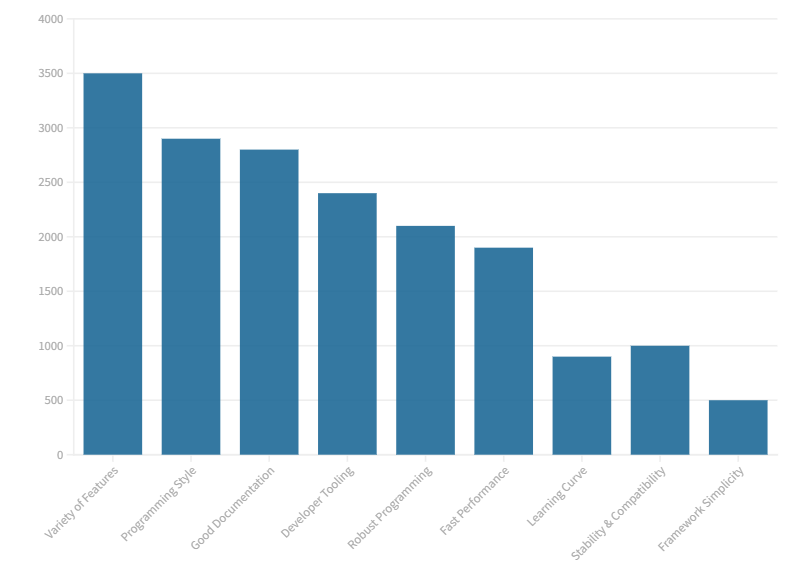 HTML can be used as a template language in Angular, and its straightforward syntax can be readily modified to communicate the app's components. Additionally, Angular eliminates the need for external libraries when developing dynamic applications.

6 reasons to choose Angular for your next development project

Similar-natured codes are well-enclosed or self-sufficient. They can be easily reused in many application components. This is especially helpful in projects with an enterprise scope, where several systems may contain a lot of similar components, such as search boxes, date pickers, sorting lists, etc.

Angular offers excellent code maintenance in a number of areas. First off, all Angular-related packages are updated simultaneously when upgrading from one major version to another, which includes HTTP, Routing, and Angular Material.

Updating is simple and typically just requires one command, "ng update." This means you won't have to waste time wondering whether the new packages are supported, pondering which version to use, or trying to figure out when a specific open-source package will be upgraded to the most recent version.

Angular is written in TypeScript. The fundamental advantage of this strongly typed language is that it helps programmers maintain clear and understandable code. Bugs are easier to detect and fix when you can see common errors as you type. This facilitates maintaining a sizable codebase and speeds up debugging, both of which are advantages in large enterprise-scale projects.

We can use more features, such as interfaces and enums, in our code because TypeScript is a superset of JavaScript. Additionally, it might provide better autocomplete, refactoring, and navigational features.

The framework is frequently utilized in native-like mobile applications in addition to offering affordable Angular progressive web app solutions that work across mobile devices. Because Angular does a fantastic job of mimicking true native apps, more and more businesses are turning to it for building cross-platform solutions. Ionic + Angular was the previous cross-platform development formula utilized by front-end developers. Angular + NativeScript is currently the most popular combination.

Angular is a full-featured responsive web design framework, in contrast to React. One essential aspect is that there is only one recommended method for developing a component, service, or module.

In reality, this results in a high level of uniformity across the code base, which is a crucial goal to pursue and prevents other developers from wondering how something was created.

In order to further increase consistency, the Angular team developed a CLI tool that can be used to generate particular repeating pieces of code from the command line. For developers, the framework's documentation serves as a current resource.

The developer's job is made easier, and quicker application loading is possible because of Angular's adaptability, which includes template syntax, the Angular CLI, routers, and other capabilities. Thanks to the framework's compatibility with a number of backend programming languages, data from all sources can be efficiently displayed in the User Interface (UI).

Gmail served as the ideal use case for integrating AngularJS, as it was created in 2004 as a single-page emailing application.

The web application for Google's mail service loads just one HTML page each time a user accesses it, dynamically updating the content according to new messages or notifications.

AngularJS manages all activities within a single webpage, whether you're reading an email, writing a new message, or switching tabs.

It facilitates quick online money transfers and acts as an electronic third-party substitute for conventional paper methods like checks and money orders.

PayPal builds dynamic websites that support real-time streams of transaction data using Angular. In the end, it's safe to say that the responsive mobile and web application experience of PayPal is supported by Angular.

Netflix is an American company that helps customers view online movies and web series on a variety of devices. One of Netflix's standout features is its huge library of TV shows and movies, the original content of which can be seen in 4K or ultra-high definition.

You can see how the databases and Angular webpages are related here. The Netflix team used Angular as the front-end tool, whereas Python and Flask were used to meet back-end requirements.

Upwork, which was founded in 2015, is the preferred freelancing marketplace for businesses and people. Upwork has generated income in the neighborhood of $79 million to $81 million.

The video-streaming service YouTube uses Angular and AngularJS to build its applications. While the PlayStation version of the YouTube app is constructed on the Angular JS framework, the YouTube TV platform enables you to watch television channels over the Internet.

This utilizes Angular and is accessible on the Sony PlayStation 3. It is a platform where millions of users from across the world can post, watch, and share videos. Most of the users who upload the videos are individual users. After YouTube had been online for a year, Google purchased the website.

On the top page of the developer site for global investment and financial services, Deutsche Bank AG uses AngularJS.

The Deutsche Bank API program is available through their developer site, serving as a point of access for the many millions of international businesses wishing to incorporate Deutsche Bank transaction processes into their web applications.

Angular has a wide range of capabilities that allow developers to achieve a rapid time to market and is extremely usable right out of the box. Due to its extensive ecosystem and plenty of pre-made components, it is a fantastic option for enterprise-scale applications and makes project scaling simple. Although there is a vast selection of web frameworks, it is important to choose the correct ones for your project, and it is easy to understand why so many developers and businesses are selecting Angular.

If you’re looking to hire Angular developers, check out Amplifyre OpenBench. It gives you the opportunity to work with amazing talents across the globe.