Flutter vs. React Native vs. Xamarin- Best in 2022

It seems the more options, the better. It's hard to disagree with this. However, that might not be the case when choosing a tech stack for your project.

Along with a wide range of technological options, your business today is likely to face stiff competition and the growing needs of tech-savvy users. While rapid time to market remains a top priority, product quality is still crucial in the long run. Indeed, the dramatic shift to digital medicine triggered by the Covid-19 pandemic has caused companies to look for ways of making this transition as smooth as possible. One of those ways is through mobile app delivery.

According to Statista, the total number of app downloads from the App Store and Google Play was approximately 36.2 billion in Q4 2021 [1]. The same source reports that consumers will download 187 billion mobile apps in 2025. 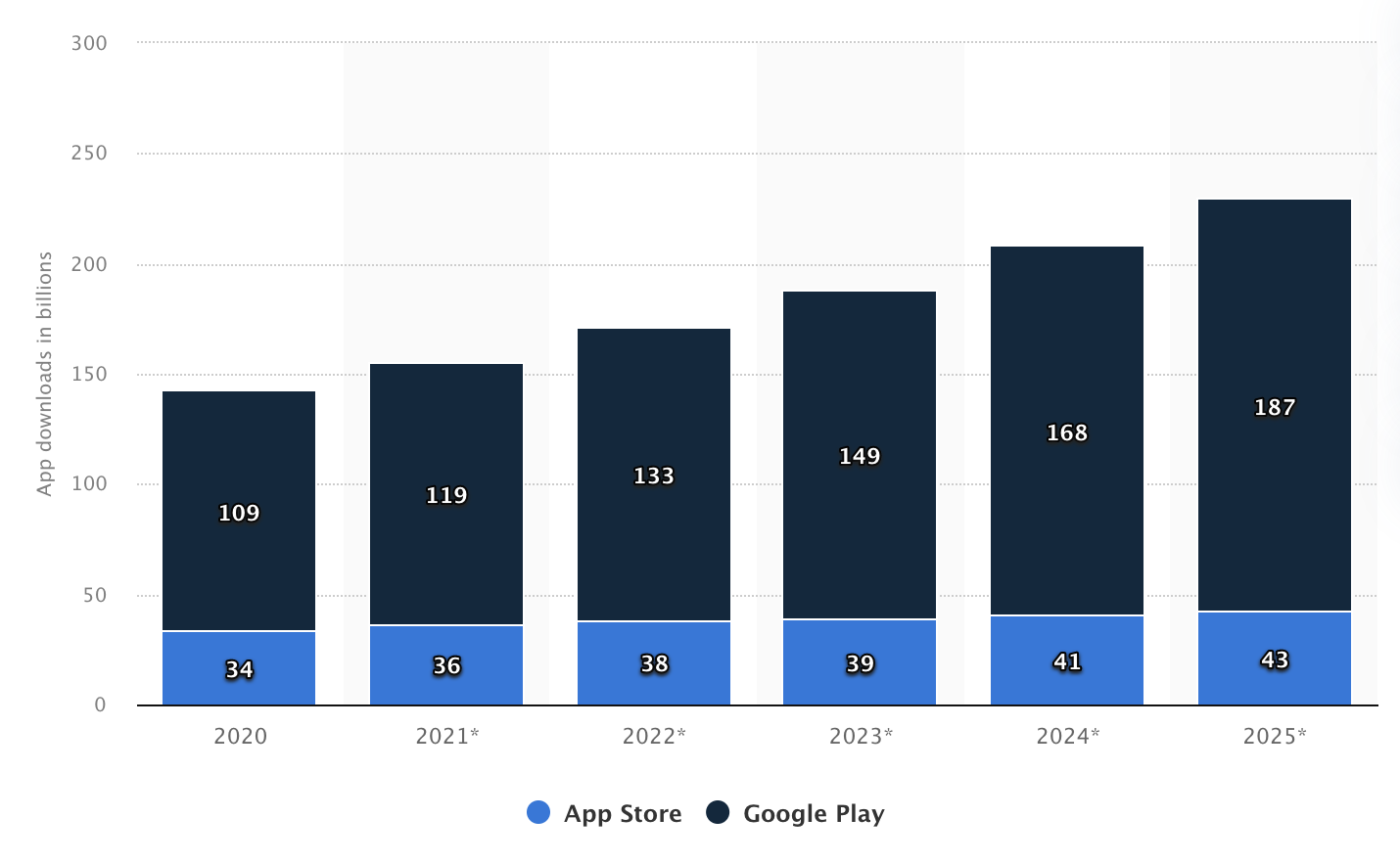 In turn, a report from the IQVIA Institute for Human Data Science found that the consumer market for digital health apps reached new heights in 2020 [2]. Thus, more than 90,000 new digital medical apps entered the market that year, with more than 350,000 applications available to consumers in 2021.

Despite the growth of the digital med-oriented app market, not all projects can boast of success. Healthcare startups continue to flop simply because the market demands speed while medicine opts for quality. They often fail to keep up with both. As a result, medical companies are looking for solutions to create favorable conditions for achieving speedy time to market and the product's future-proof quality. This way, they have a better chance of building trust and staying ahead of the competition in the constant race for patients.

In the race for quality and speed, companies can face the following issues before getting to the heart of the matter — application development:

Although hybrid and native bring their unique perks, the current preference among companies is for multi-platform development. And the reason is quite obvious: in one fell swoop, you achieve double results. What can be better than good code? Less code… With multi-platform product building, you get one code suitable for both iOS and Android. Thus, we get to the bottom of this, or rather to the next question: which platform should you pick  for multi-platform solution engineering?

Flutter, React Native, and Xamarin is in the spotlight today as some of the top frameworks for building near-native mobile apps.

Launched in 2018, Flutter is a Google-backed software development kit (SDK) for mobile product launch,mainly designed to create iOS and Android solutions with Dart programming language. Besides being free and open-source, Flutter is quite a popular novel framework among developers who use it for friendly-used and personalized UI generation.

In addition to quicker and smoother code writing, Flutter is also valuable for providing components to create close to native solutions. This, in turn, positively affects the user experience in the long run. Besides, the platform can offer the following features:

One of the most notable features of Flutter is its "hot reload" option. In other words, developers can track changes made to code in live preview without wasting time rebooting the entire system after each code modification. As a result, the team has more "space" to experiment and more opportunities to speed up the implementation of new features.

Flutter is equipped with off-the-shelf custom widgets that developers can freely use to achieve a pleasant-looking interface. By combining fonts, color schemes, and buttons at each level of customization, the output can result in a personalized and unique app.

With additional third-party integrations, you can access native features (camera and geolocation, for example). It is possible to reuse Swift and Kotlin when engineering a product,  significantly reducing the development phase.

Introduced by Facebook in 2015, React Native has quickly become a robust tool for natively rendering mobile apps for both systems. This open-source framework allows developers to build solutions using native components and JavaScript. The popularity of JavaScript has provided many perks for React Native. At the same time, the flat learning curve has made the toolkit preferable among developers.

The platform uses the concept of "bridging," the essence of which lies in the interoperability of JavaScript with native code elements, making React Native quite a flexible option. With this interaction, tech experts can generate features that cannot be developed with a cross-platform code and still get a feature-rich, high-performance application.

As with Flutter, React Native also has a Fast Refresh (aka hot reload) feature. It enables immediate modifications to an app without having to recompile it each time.

The React Native ecosystem is packed with a large number of UI components. UI libraries such as Shoutem, Expo, native base, and others help developers spend more time on “innovations” instead of creating a feature from scratch.

Having originated back in 2011 and reaching a particular peak of popularity in 2016, Xamarin, as an open-source Microsoft-backed framework, today remains one of the longest-standing but still relevant technologies for creating iOS, Android, and Windows applications.

With a reusable code base, an extensive UI library, and the added functionality of the .NET platform, Xamarin is used to deliver the look-and-feel of native solutions with unique features in minimal time.

Also, it has a cloud-based automated testing platform and a bug tracking tool.

Depending on different metrics, each framework has its advantages and shortcomings. To better understand which framework is right for your business, it is worth considering both technical parameters and general ones.

One of the key points of technology quality assessment is the result, i.e. how the application performs.

Winner: Flutter by a small margin

[an example of the image] 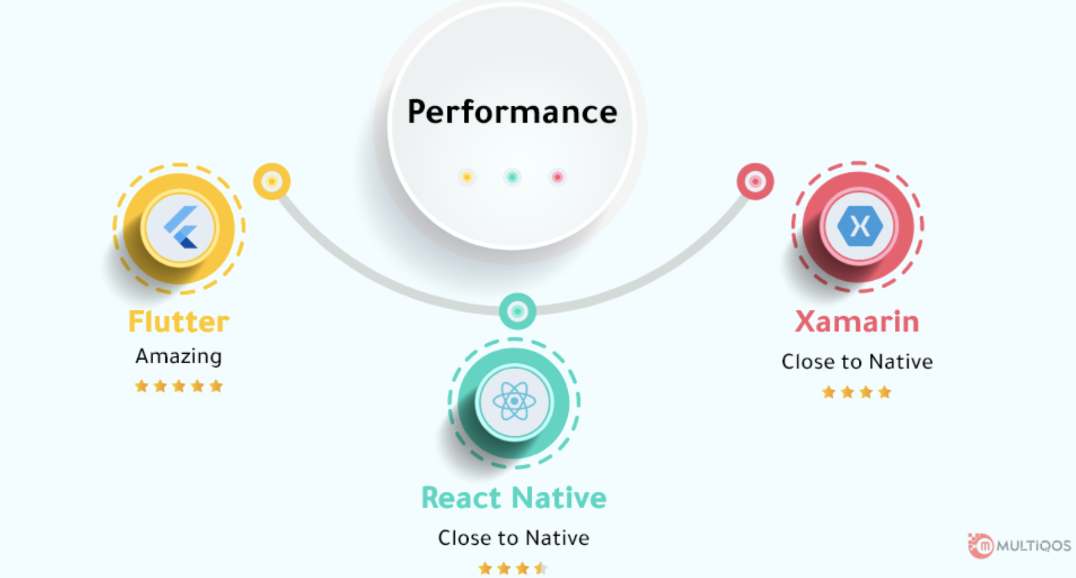 The key point of the cross-platform feature lies in code reusability. But it does not mean that all code written for iOS can be duplicated for Android. I.e. reuse applies to some parts of the code, while others need to be rewritten according to the platform specifications.

The frequency of technology use is probably the most critical factor that determines its value according to established market conditions. With more and more frameworks emerging every year, it's not surprising that Xamarin's dominance as the longest-lasting of the three technologies is already losing validity, albeit without diminishing the power it has gained over the years.

Xamarin peaked in acceptance in 2015-2016. However, in 2017, the emerging React Native intended to take the lead. Based on 2018 StackOverflow statistics [3], both React and Xamarin are among the top 10 most popular platforms. But according to 69,000 survey respondents, React is three times more highly used than Xamarin (27.8% and 7.4%, respectively).

However, the supremacy of React Native has begun to fail in recent years. The main reason for this is the Flutter's emergence on the skyline as one of the most future-proof tech stacks. According to Statista, Flutter proved to be the most sought-after cross-platform mobile framework in 2021 [4]. The survey found that 42% of software engineers preferred Flutter over React Native, leaving behind Xamarin with 11%. 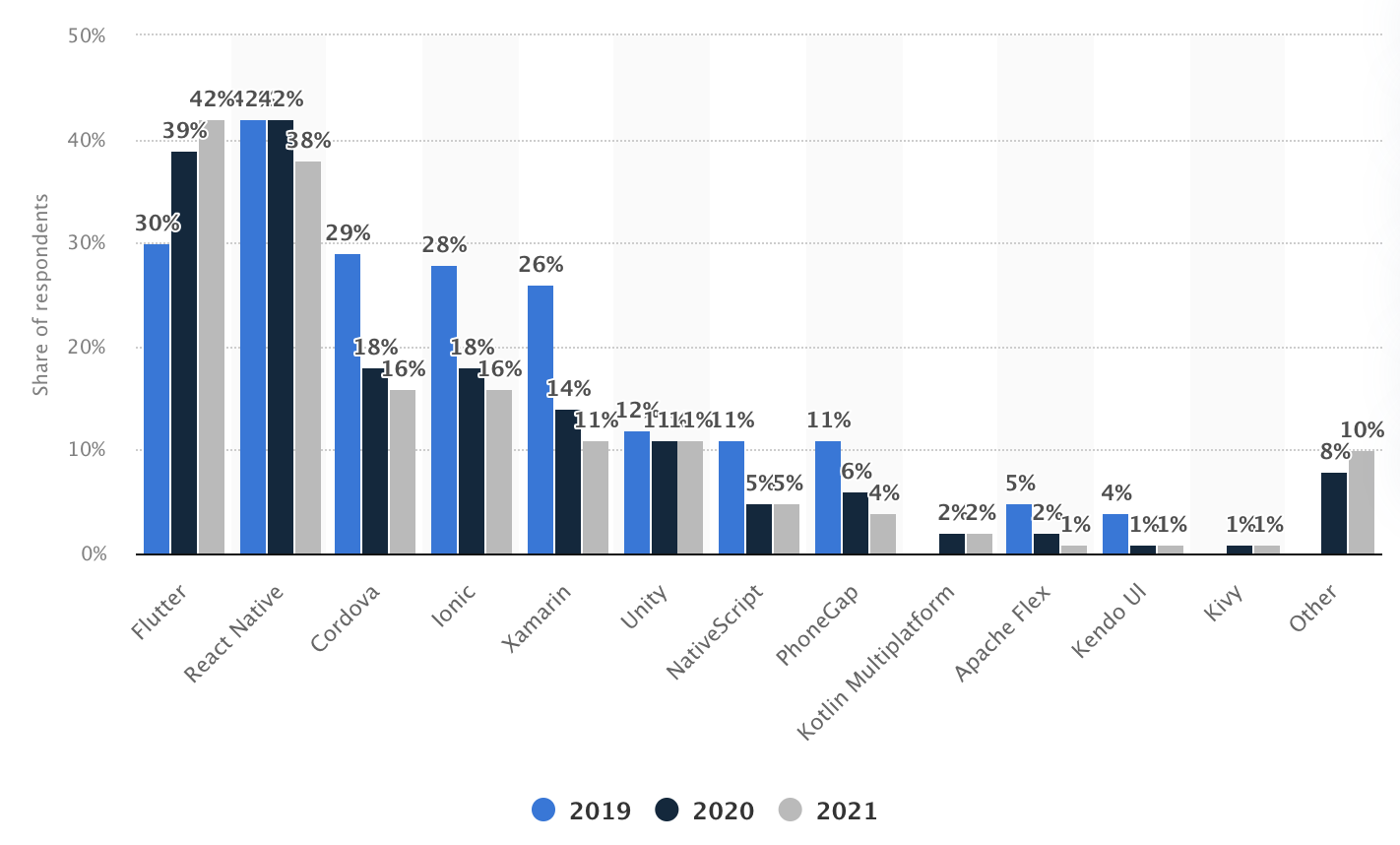 When choosing a technology, it is advisable to pay attention to such seemingly unremarkable points as the presence of the required developers in the labor market. The fact is that Flutter has a scarce pool of developers, although the community continues to grow.

In contrast, React Native has a huge developer and information pool from which to draw tech data. In addition, the JavaScript community and its popular TypeScript variant reached the top of the most demanded programming languages in the world last year [5].

As for Xamarin, it will not be so difficult to hire an experienced developer. Over a fairly long period of time, a robust community of tech experts has managed to mature, having gone through a time of bug troubleshooting.

A strong community and immediate access to the necessary documentation are vital to the long-term technology evolution. The possibility to quickly identify a problem and find a solution helps tech-related specialists accelerate both the development workflow and their expertise growth.

Although Flutter is a fledgling platform, it already has a strong growing community of tech enthusiasts. In addition, the QA forums, websites, and extensive documentation make the process of learning the technology even faster and more seamless.

React Native and Flutter go head-to-head. But despite React Native having one of the most powerful communities in the world, Flutter surpasses React Native in Github scores (104k [6] and 103k stars [7], respectively) and contributors. At the same time, when comparing frameworks according to the greater possibility of hiring an experienced specialist, React Native comes out ahead.

Compared to the two platforms, Xamarin has poor community support. Forums and "help sources" are not instantly available to Xamarin users. Therefore, despite its superiority in terms of timelines, it is significantly inferior to its competitors.

Winner: Flutter with a slight advantage over React Native

Which framework to choose? The answer is quite controversial: it depends...

Each framework has its pros and cons, but even the differences mentioned can be considered minor.

If you want to create a mobile app with a smooth UI in minimal time, then your choice might fall on Flutter. However, hiring an experienced Flutter developer would be a major hurdle.

In turn, hiring a React Native developer would be easy. Moreover, React Native is especially attractive if you already have web and backend developers using JavaScript (TypeScript) on board. As for Xamarin, it provides nearly 100 percent code reuse, which is higher than in other frameworks.

Nevertheless, it is always worth considering your business needs and priorities when choosing a technology. Scarce community support does not mean the technology is lagging, while its ease of deployment does not promise the power of a future solution.

If you're stumped on choosing a technology stack for your mobile health solution, Brandmed's tech team with a medical background can guide you through the trade-offs. From discussion to application deployment and business development, we are ready to assist you with your digital medicine initiatives. Shall we start? 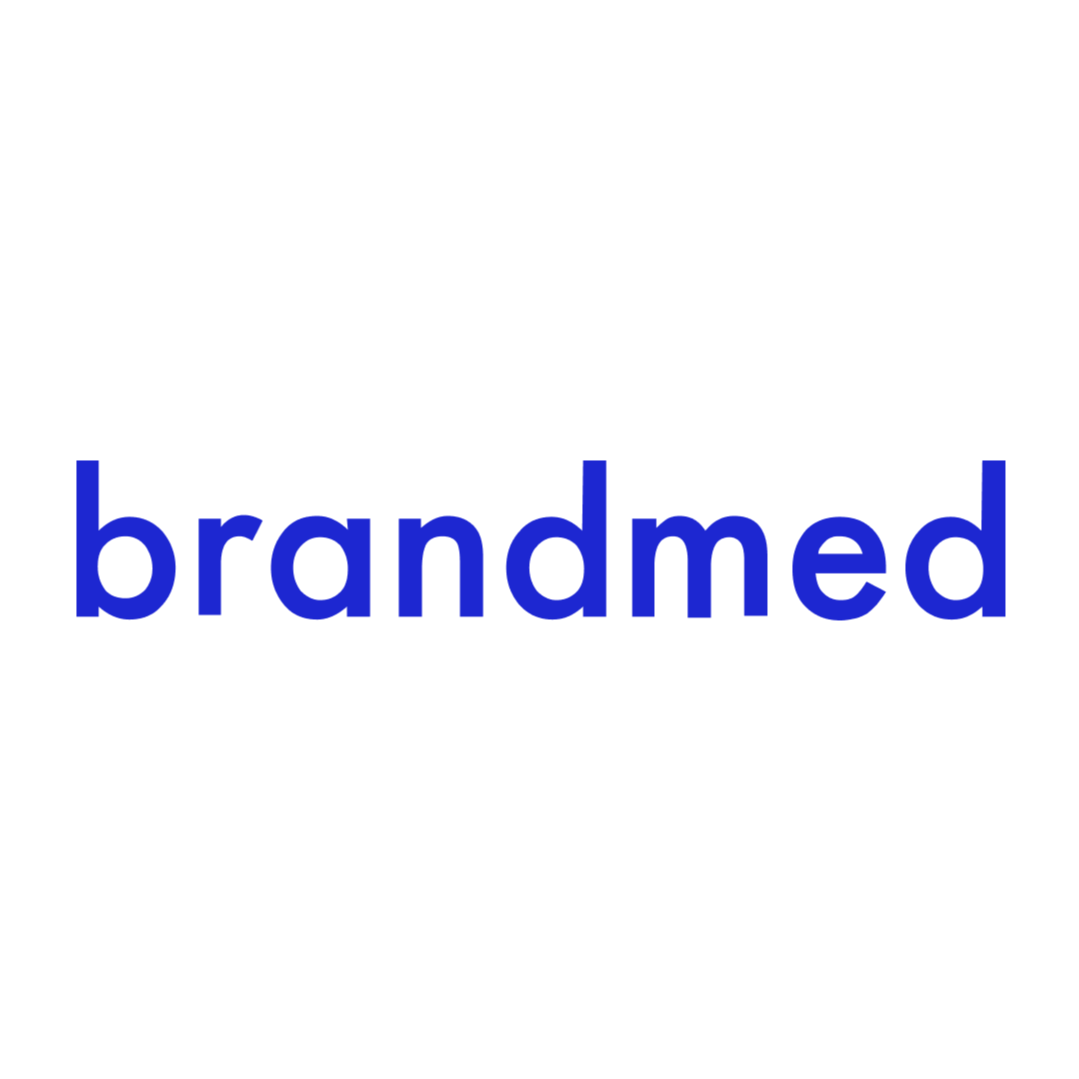