4 Key Types of AR and What Makes Them Special

It’s pretty striking how little most people know about augmented reality (AR). They associate it with games and gimmicks, think all it does is display 3D objects on a camera feed. But this could not be further from the truth. Today, you can do so much more with AR than get a few minutes of entertainment. This technology can be a strong and versatile asset to any business.

AR has come a long way from 1992 (when the first functional AR system launched) to now, but the basic principle has remained the same: when somebody uses AR, they maintain sight of their surroundings, but new digital and virtual objects enter the field of view, usually presented through a screen or digital interface. Beyond that, there is a lot of variety to AR:

Each of these types has a unique role and use cases worth checking out. So why don’t we take a closer look at them and also see how you can use them in your business? You might just decide to build an AR app of your own or take advantage of AR development services.

What is Marker-Based Augmented Reality?

Marker-based AR is an approach that heavily utilizes image recognition. To put it simply, the application captures footage with a device camera and scans it for the presence of markers. Markers are images that correspond to 3D content that should be displayed on the user’s screen. This allows the virtual experience to be extremely precise and tailored to a specific location and orientation.

When to use the marker-based approach

Marker-based apps are mostly selected for precision. In other words, in situations when a human analyzing the situation would take too long or if the information gleaned from a particular setting is more complex than general knowledge. For example, a scan of a control panel with hundreds of buttons will be able to analyze the settings and identify issues far quicker than a person could.

How to create a marker-based app

AR Tracking/recognition software is quite difficult to build, so developers try to cut down on scripting time by using simple markers. QR codes are very popular, as are basic shapes and designs (like geometric figures, large letters, symbols, etc.). Thus, developers add these markers into the app’s code and create scripts so users’ devices can identify them under different lighting conditions.
Usually, the software is built in such a way that when it identifies probable features of a marker (unique details), it captures the frame and processes it to determine whether in fact the image matches the marker. If everything fits, augmentation occurs and the virtual object is visualized on top of the real footage. 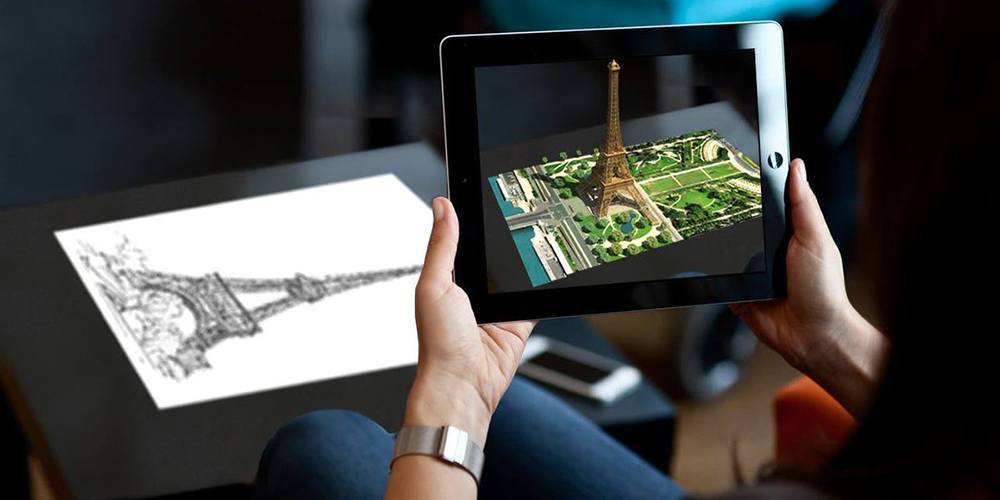 Hong Kong has developed an app for tourists that allows them to see what is no longer there without visiting a museum. To be specific, users scan modern street signs in at least 13 locations and get to learn about their historical role over time.

What is Markerless Augmented Reality?

Markerless AR apps do not rely on any specific image to display their digital content, and can thus be used in nearly any location and setting. However, this does not make them overly simplistic, because even augmented reality with no marker can have complex and highly useful algorithms built in to display content in a particular way.

When to use the markerless approach

The markerless approach is highly useful when you expect users to utilize the app in various (even unpredictable) situations and areas. For example, if you want them to try on clothes digitally, you can’t expect them all to scan a QR marker at a specific height and angle. Instead, you can tailor your app to adapt to their location based on the information and measurements it can collect.
In conclusion, this approach helps grant accessibility to the widest possible audience and lets them enjoy an immersive experience with average-level accuracy and precision.

How to create a markerless app

The most common way to build a markerless app is to make it recognize flat surfaces and borders of areas (rooms, halls, etc.). Accordingly, the digital objects are visualized at a realistic angle and take up just as much space in the room as they could in physical form. Sometimes, such apps are even more advanced than marker-based ones when they take advantage of machine learning and low-visibility visualization. They are prevalent both in the form of mobile apps and markerless WebAR software. 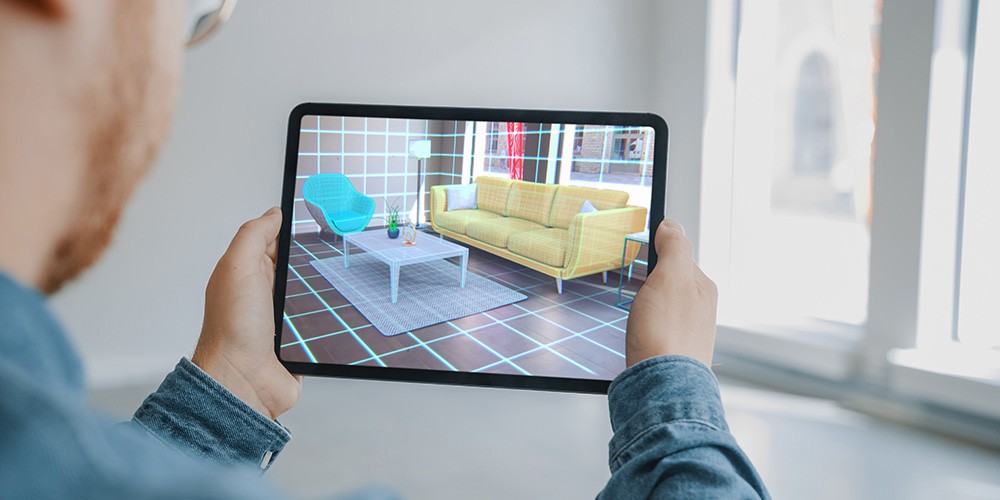 What is Location-Based Augmented Reality?

Location-based AR (a.k.a. geo-based augmented reality) provides tailored digital content based on user location, but the analysis of the user’s location does not come from visual cues or markers, but rather their GPS location. Oftentimes, the user’s camera is not even used for augmented reality navigation, but the app collects data from their GPS module, accelerometer, compass, and gyroscope to determine what content should be displayed.

When to use the location-based approach

Location-based AR is highly useful for apps centered around tourism, travel, and sport. Most commonly, they utilize data from city/road maps, but can also be helpful in uncharted areas – mountains, forests, deserts and the like. Even in these remote areas where pre-existing camera footage is not available, data about the elevation, terrain, flora and fauna can be utilized to give users an augmented reality map of the surrounding area.

How to create a location-based app

Many developers prefer this form of AR because it does not require programming complex image recognition functionality or specific markers into the app. Instead, the app just collects a set of data from the device (e.g. where is the user, which height/angle the phone is pointed at, how fast they are moving), and combines it with open-source data (like existing street maps or 360 tours of special locations) to give users an immersive experience. 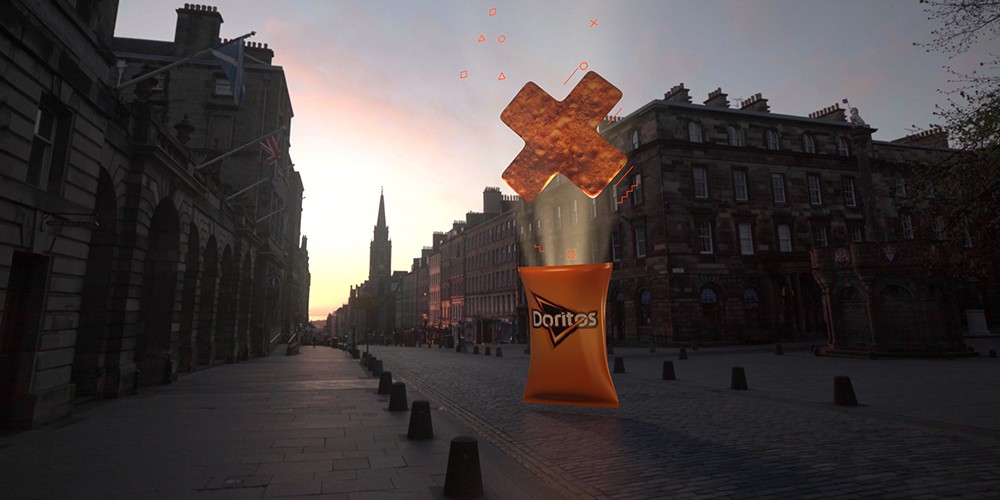 What is Projection-Based Augmented Reality?

Projection-based AR is a unique form of immersive tech that does not require any smartphone or gadget. In fact, it doesn’t require any kind of screen. Instead, one or multiple projection devices form a 3D model with light. Most commonly, the 3D model is static (unmoving), but it is certainly possible to animate it as well. This approach is essentially what we think of when we imagine a hologram.

When to use projection-based AR

Because few consumers have the hardware needed to form these models of light, this type of solution is mostly used by businesses – for presentations, AR training, and development purposes. For example, the projections can be used as part of a marketing campaign or a pitch to investors to develop a new product. A detailed representation of a product or system can also help customers/employees learn about its structure and how it works.

How to create a projection-based experience

Projected 3D models are not formed through apps, so you will just need the spatial/design data and special hardware (projectors) to present them. The data for the 3D model can be collected through scanning or photographing a physical item or through custom design. Past that, you will spend much time calibrating the settings of the projector(s), making sure the model’s depth, edges, color, size, and other visual aspects are accurate. 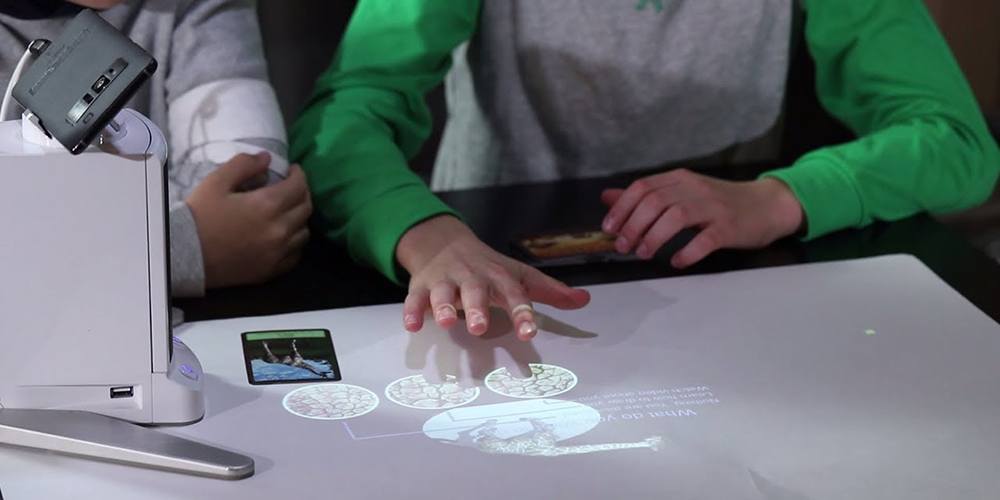 Comparing the Different Types of AR

With so much variety in augmented reality solutions, it can be difficult to choose the type that is best suited for your business. To make the process easier for you, we have made a side-by-side comparison of the options below:

Precise visualizations tailored to one object or location.

Universal visualization with recognition based on environment.

Highly realistic presentation with no user interface or screen.

It is quite difficult to implement consistent tracking after the user turns their device away from the marker.

Creating a recognition system for reflective or transparent surfaces can be very complicated.

GPS is a strong drain on phone batteries, so app performance must be highly optimized.

Each model takes a long time to develop and calibrate on projection devices.

Please note that the table above is a general reference and does not even begin to cover the peculiarities of the 4 AR types. For example, if you do not see a particular industry or use case covered, this does not mean that the door is closed for it. The technology is very flexible in what and where it can be used, so the main requirements for development are imagination and a solid business case.

How to Build an AR Experience of Your Own

If you are new to the world of immersive tech, getting started with app development can be a long and difficult process. Most businesses that decide to implement such a solution lack the resources (time/specialists/experience) to do it in a timely and expert fashion, so they put their trust in a development partner.

Program-Ace is one of the leading companies in the field of AR/VR development with a focus on enterprises and companies operating in a wide variety of industries. We are the company behind the previously mentioned Hy-Way Heater AR application and a good number of other immersive projects.

We will be thrilled to help you with your AR project, even if it is highly complex and large in scope. Just contact us, and we will take the first step forward towards getting it done at an excellent level of quality!